When Did You Know You Were “Gay”*? 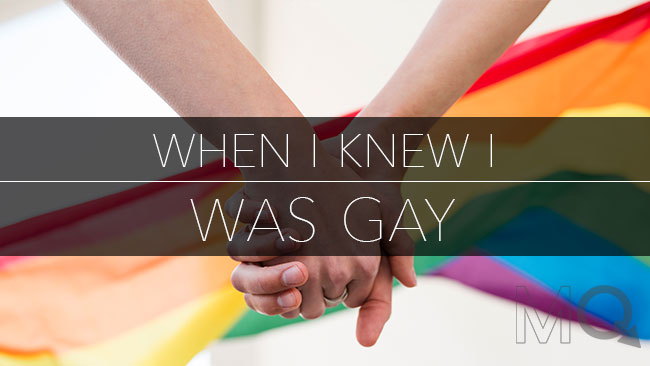 This is a question that people instinctively ask (source of instinct unknown) when I tell them I’m gay.  Straight people ask me this, gay people ask me this.  I think I might have started off asking other people this.  I don’t anymore, at least I try to stop myself from blurting out this awkward sentence when I meet someone and they say “I’m gay”.  (Okay, once or twice when I was hit by the question, I accidentally asked them in a reciprocal way out of trained courtesy.)

When did you know you were gay*?

It’s not a rude question, I don’t get offended.  I just don’t emphasize on knowing at what age, date or moment someone found out they were gay.  No, I’m not undermining the turning point of your life, I’m not saying it wasn’t one of the most important moments you’ve had because, for many, it probably was.  It’s just that to me, I’ve never had that moment of “Oh, I’m gay” (or in the affirmative, “Wow, I’m gay!!!”).  I never found out I was gay.  I was taught to be gay.  I was told what being gay meant.

I Didn’t Know I Was Gay

I met my partner when I was 10.  And, no, we did not start dating in grade school.  At that tender age of homework and fancy stationery, I did not know what love was, the closest feeling was probably an immense liking of nice smelling erasers.  But looking back, it was definitely love at first sight.  My diary pages were filled with nothing but what I thought about her, what I did with her after school, how I wanted to be like her, her, her.

We started dating at 20 and I still didn’t know I was gay.  I was with a wonderful girl whom I’ve adored for half my life and I was overwhelmed.  Everything was new, fresh, bursting with light, like the moment color TV was invented.  We had fights, of course, we cried and used breaking up as threats.  But no, we never talked about being gay.  I was so busy being in love I didn’t see anything else but her (which wasn’t the best thing when you’re two weeks away from your finals).

I Still Didn’t Know I Was Gay

My friends knew about us dating, it didn’t occur to me to hide the fact that I was dating a girl.  I was just dating the love of my life and that was all I needed.  No one gave me awkward reactions or said anything that would make me Google “I’m gay”.  Everything was fine, at school and with my friends, at least.

A Plausible Point When I Figured I Was Gay

And then I graduated and got my first job.  I worked for a small local charity in Hong Kong.  So there I was, a rookie in the field, scrambling to position myself and get the work done.  While focusing on tasks at hand, it suddenly occurred that working is not just about deadlines and KPIs, it was about relationships (i.e. gossiping in the pantry).

People are curious beings, we love sticking our noses into other people’s personal lives.  And when I was surrounded by a bunch of noses asking about my dating status, I can’t remember for sure if I was asked outright if I had a boyfriend, but all of a sudden, I had a boyfriend.  For some quiet unsettling feeling, I didn’t want to say I had a girlfriend.  Maybe being surrounded by women with husbands and crushes on cute guys, I felt out of place.  I felt different.

So I am Gay

For my first three jobs, I had a boyfriend.  It didn’t start off horrible to say that, I just thought it was easier to explain.  My partner didn’t mind me pretending, I didn’t mind pretending.  But over time, a small feeling stirred and formed within me.  Maybe it was a news headline about Pride, maybe it was my mother asking me if I’d try a guy, maybe it was “I Kissed a Girl and I Liked it”.  Whatever it was, I learned that I was different.  I was told that I was not what every else was.  I was taught to be gay and ashamed of it.

No, wait a minute.  Why should I be ashamed of it?  I’m in love with the most amazing girl in the world and I’m proud of that.  My partner is my strength, my inspiration, my pride.  No shame, only love.

Now I’m Gay and Loving it!

10 years into our relationship, I’ve become aware of my identity.  I’ve become aware of the plights we gay people face.  And not only gay people but anyone who does not conform to the prescribed standards of gender identity or sexual orientation.  I’ve also discovered the important world of activism to stand up for my rights and yours.

Learning to be gay wasn’t a smooth path, life rarely is.  Now that I’m certain I’m gay, I’m loving every moment of it (except when there’s only one crappy gay bar in Taichung) because, at the end of the day, it’s just my hand in hers.

* Gay as in same-sex attraction, I’m a lesbian**, just to let you know
** Lesbian as in I identify with the female*** gender and so does my partner
*** Female as in she/her (literary terms), XX (DNA terms), pink symbol with a dress (toilet direction terms) and so on, I’ll keep the rest for another piece