How Many People are Gay? New Research May Hold the Answer 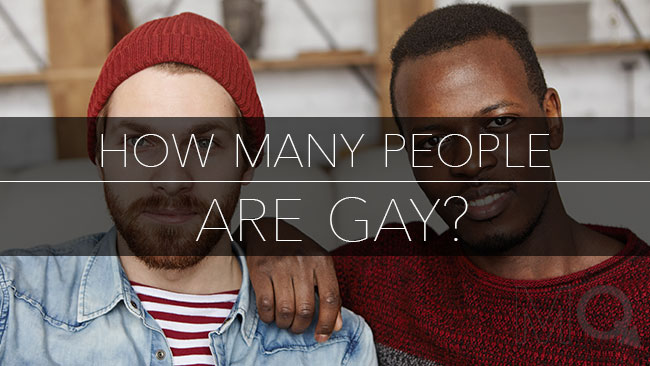 There is no question – being gay is the minority.  In the grand scope of things there aren’t very many of us.  This is changing fast though as being out and proud is becoming more and more common. So how many people are gay?

People who were too afraid to speak up in fear of social judgment are revealing their true sexual identities in larger numbers than ever and people are starting to take notice.

How Many People are Gay?

We can’t yet say for sure how many people are gay, but as you may have heard before, the most common statistic popularized by the 1948 study “Sexual Behavior in the Human Male,” by Alfred Kinsey says that around 10% of people are “gay”.  This, at the time, was a groundbreaking study, especially then considering the general sentiment of homosexuality.

This may be the most famous, but this is only one set of research that is decades old.  It sounds nice, but is not substantial enough to offer a definite answer.  Kinsey was one of the first to popularize these different ranges of sexuality, and his data is the typical “go to” answer, but what exactly do other, more recent studies have to say?

We will get to that, but first, we need to look into a much deeper issue in answering this questions which is not quite as simple as it seems on the surface.

How do you define Gay?

One of the other greatest things about Kinsey’s research is that it brought about the idea that sexuality is not something that is strictly black or white, but instead a scale where each individual measures differently.  That’s what makes answering this question so difficult, because “gay” is actually two different categories of people.

The first being, the percent of people identify as being gay.  This is the more typical definition of people whose preference is to the same sex.

The second category is a much broader type of people who have had same-sex experiences, be it once or many times, or with some level of sexual interest towards the same sex.

Let’s start with the more typical definition of “gay people’.  Recent data from the US census looked at those who reported as gay, lesbian, or bisexual.  This data points to a number close to about 3% of the US population, and among these people, there are 646,464 same-sex households in the US [US Census].

This is a number much lower that the 10% popularized by Kinsey, but remember that this is only through self reporting.  Census numbers have been on a steady rise, especially after taking into account the recent positive changes in US social atmosphere towards LGB peoples.

Our country is just starting to open up towards gay men and women.  That means that people are slowly becoming less afraid to check the box saying “I am gay”.  Because of this it is safe to say that the real numbers are a bit higher.

In other studies like The National Gay and Lesbian Task Force Gallup poll, results as high as 8% were reported [Gallup].  Whereas the Williams Institute at UCLA reported around 4% [UCLA].  Taking this into consideration the true number of gay people is anywhere between 3-10% for either extreme.

Everywhere Else on the Spectrum

When looking at data in terms of people who have ever had a same-sex sexual experience, the numbers are as expected, higher.  In Kinsey’s report, about 1 in 3 people admitted to having a sexual experience reaching orgasm [Kinsey, p. 656].

In a more recent 2013 study, researchers from Ohio State University and Boston University surveyed 2,516 US participants in a lab using an anonymous computer-based survey system.  A much higher result than Kinsey’s data found that 59% admitted to having same-sex experiences.

Even more interesting is that 65% of respondents identified as not having a fully “heterosexual” identity  [NRER].  This means that people who are not a rigid heterosexual identity may be well over half of the population.

Overall it is hard to measure exactly how many people identify as gay because socially, many people are still afraid to admit their sexual identities be it from social pressures, or fear of ridicule.   Also, because homosexuality is a spectrum it is often hard to put a label on who is “gay”.

As for what percent of people in the world will live in long-term homosexual relationships, only time will tell, but today the numbers point to about 3-10%.

As for what percent of people will enter same-sex activity, it is probably much more common than most people previously thought, and this number may actually be in a majority.

What do you think?  How many people are gay, bi-sexual, bi-curious, or even “hetero-flexible”?  Do you agree with these numbers, or are they way off? Leave your comments in the section below.

Prev post Gays: Were We Born This Way? Is Homosexuality a Choice?
Next post The HIV Home Test: New Kit Let's You Check Your Status at Home