One Factor Makes You Twice as Likely to be Gay 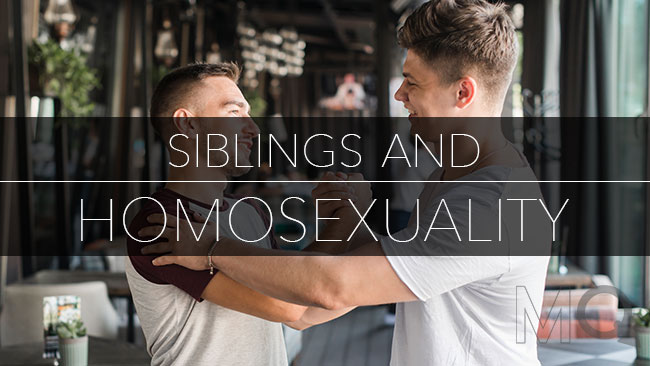 If you are a man, then there is one factor that makes you way more likely to be gay.  It’s not playing with barbies or listening to too much Spice Girls as a kid (although that might help). No, it is actually something more common than that.  The real answer is something scientists have long predicted but were never able to prove until recently – that something as simple as having an older brother can drastically increase your chances of being gay.

It might sound crazy but there are years of research and multiple studies which suggest that that this is actually true.

Having Older Brothers Makes You More Likely to be Gay

Anthony Bogaert, in his famous study from Duke University sought to answer this very question, and his findings are interesting to say the least.  As mentioned earlier, his research is trying to answer whether or not men with older brothers are more likely to be gay. In this 2006 study, he looked at adopted vs biological brothers.  He found that in the group of adopted siblings, environmental factors of being the youngest had little to no effect in increasing the odds of homosexuality.

Biological brothers, on the other hand, had a very real, statistical increase in the likelihood of younger brothers being gay.

This, along with many other similar studies found that younger brothers were anywhere from 28-48% more likely to be gay depending on how many older brothers they had.  The more older brothers, the more chances increased.

This suggests that environment has little  effect on male sexuality, but instead birth order.   This may be due to a change in gestational chemistry with each successive male birth.  To put that in simpler terms, with each male baby, a woman’s body treats the male fetus differently, and to a larger degree blasting it with hormones and altering its genetic makeup.

Why is this exactly?

Another famous, 2001 study by research Ray Blanchard looked at possible biological factors that would increase the odds of male homosexuality in relation to fraternal birth order. He says:

“…It has been hypothesized that this fraternal birth order effect reflects the progressive immunization of some mothers to Y-linked minor histocompatibility antigens (H-Y antigens) by each succeeding male fetus and the concomitantly increasing effects of such maternal immunization on the future sexual orientation of each succeeding male fetus. According to this hypothesis, anti-H-Y antibodies produced by the mother pass through the placental barrier to the fetus and affect aspects of sexual differentiation in the fetal brain…”  [ Blanchard]

So what does all of that mean?  To put it in simpler terms, the male Y chromosome is seen as a foreign body in the female uterus.  Therefore it triggers an immune response that becomes more powerful with each successive male baby.  Think of it as how the body becomes more effective at attacking the flu after being exposed previously, the same happens to the male baby as the response becomes stronger and stronger.

But why would a mother’s body do this to its own baby?  It sounds counter-intuitive, but the most popular theory is that with each successful birth, the biological role changes of an offspring from bearing their own children to instead help raise the children for their siblings and play the role of caregiver to help increase the odds of genetic success in an indirect way.

The idea is that if your mother already has 5 or 6 children capable of pumping out babies of their own, then the role of the youngest is to support their older siblings.  All of this is still a theory and we haven’t answered the question entirely, but it is interesting, to say the least.

What do you think?  Do you think that having older brothers can change the chances of being gay?  Does this theory make sense or is it something else?  Leave your thoughts in the comments below.