My Night in a Japanese Gay Host Club 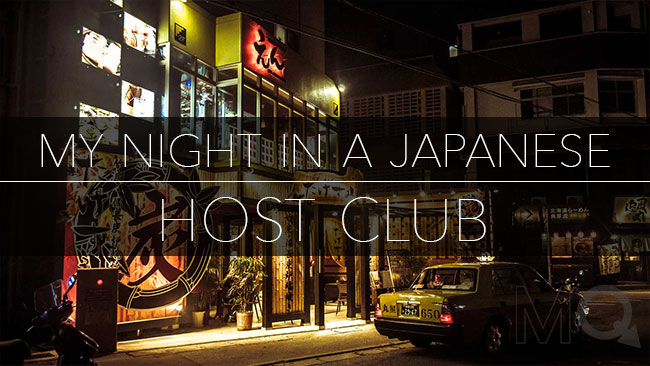 Here I was in Okinawa, a small island isolated Japanese island with not much in the name of “gay nightlife”, but I had just arrived with a group of college friends and we were ready for a night out.  After a quick Google search, I soon realized my options were slim.  Well, that is if you consider one gay bar “options”.

It was called Man Man Man (男男男).  Can’t you get much gayer than that right?

Despite the lack of options, we decided to go.  If this place was great, then we could enjoy the night together, and if it was terrible we could just move on to somewhere else – or so we thought.

My Night in a Japanese Gay Host Club

To start, Okinawa’s one gay bar was extremely hard to find, hidden away on the third floor as if hoping no one would ever notice it – its sign barely visible from the street.

As we ascended the stairs you could smell the years of cigarette smoke wafting off of the yellowed wallpaper, the dimly lit stairway barely wide enough for two people to pass one another.

When we finally arrived at the front door I tried to peak through the poster covered windows.

“This must be it” I said to my group of anxious friends who could tell this was probably a bad idea before we even went inside.

As we opened the front door a wave of cackling resonated into the hallway, as a group of middle-aged Japanese women had just heard the punchline to a long, drawn out joke.

My first thought was that we were in the wrong place.  Why was a gay bar full of housewives wearing neon colored clothing and makeup that had been put up a little too thick?

As we stepped in, the bar went silent and all heads shifted their gaze in our direction.

Behind the bar were two Japanese men, one man casually cleaning some shot glasses and the other looking onto us with a beaming smile.

“Welcome!” he exhaled in a bouncy voice, his smile wide and sparkling. “Please please, over here.”  He gestured to a booth in the corner.

Definitely Gay.  That much was for sure.

He escorted us to a small sitting area with leather lounge chairs and an assortment of aroma candles.

“You look very handsome!” He said to me and my other friend, gently brushing our shoulders.

“Sit Sit!” he insisted and we all nestled into a corner booth.

Our friendly Japanese bartender sat down at the head of the table, his elbows resting on the surface and his chin on top of his interlocked fingers.

The other bar staff quickly trailed behind bringing plates of peanuts, Pokey, and other Japanese snacks, laying them gracefully across the table.

Also gay, there was no mistaking it.

“Please, eat!” he said as he nudged the bowls of snacks in our direction.

His friendliness was surprising, seeing as Okinawa’s American military base had all but ruined the image for foreign guests.

“Arigatou” I said in Japanese as I reached for a snack.

“OHH! You speak Japanese?  You are so good! Wowwwww!” he said in awe., clapping his hands gleefully and laughing out loud.

Something in me said that this guy must really like foreigners as he continued to bring over more free snacks and stayed with us, making rounds chat up all members of the table.

We were all a bit confused.  Were we famous here?  Had a foreigner never come to the one and only gay bar on the whole island?

After about 10 minutes the other bartender brought over a drink menu and placed it on the table.  At this point, we wanted nothing more than a few cheap $4 Japanese beers and then get out to explore the city.  After all, this place wasn’t exactly hopping.

But as we opened the menu our typical selection of beverages was nowhere to be found.

I passed the menu around to my friends to see if I was reading something wrong.

“What should we do?” we whispered to one another.  “Let’s just leave.  We don’t have to order anything!”

That is until my friend pointed to the table of empty boxes and half-eaten Japanese snacks.

“Well, we have to buy something!  What is the cheapest drink on the menu?”

We decided to get three of the $15 dollar Asahi beers.  We figured between the 5 of us we would all drop ten dollars each and get the hell out of this mess.

Our bartender soon brought over our beers, and still stayed with us, pouring our drinks, and promptly topping us up as our glasses emptied.  This was the best service I had gotten at any bar, gay or straight.

Our 40 something-year-old Japanese man then slipped in beside my other gay friend.

“Can I have your number?  You are very handsome.”  He placed his hand on his thigh.

We all broke into friendly laughter and tried to brush off the question.

“Actually, we are getting ready to head out,”  he said, trying to change the topic.

“So soon?” his face was sad and he tried to encourage us to buy more drinks.  We politely refused.  After all, things were getting a little weird already, and there was no way we were getting more beers here.

He headed back to the bar and retrieved the bill.  Eager to get out, we had all prepared our money promptly so we could give it to him and go, but as we opened the bill a wave of shock set over us.

We all sat in awe, checking it over again and again.  There must be a mistake.  But there it was – right there next to the drinks was a line which read, “Service Fee”.

I had heard about Japanese host bars before, but now I truly understood their tactics.  We had been fed and watered and chatted up, but now it was time to pay.

As we tried to think of an excuse to get out, our now clear to us “host” stood hovering over the table, waiting for the money.

There was no way out.  The damage was done, and we had to accept our mistake. Sitting in shame, we divided up the money and handed it over to our ever-smiling host.

As he walked back to the bar my friend started shoving packs of the leftover unopened snacks into her bag.

“We’ve already paid up!  Let’s get our money’s worth and get out!”

As we hurried down the narrow steps and onto the street, I felt a wave of relief.  Yeah, we fucked up, but our crazy bar experience was finally over.

That is until my phone got a buzz.  It was a new message on Jack’d,

Yeah, our Japanese host hadn’t managed to get our numbers, but this wasn’t stopping him from finding us afterward.  Ready to move on and forget about what just happened I wrote back,

“OK! But next time drinks on you!”