Does Age Matter? Dating in the Gay World 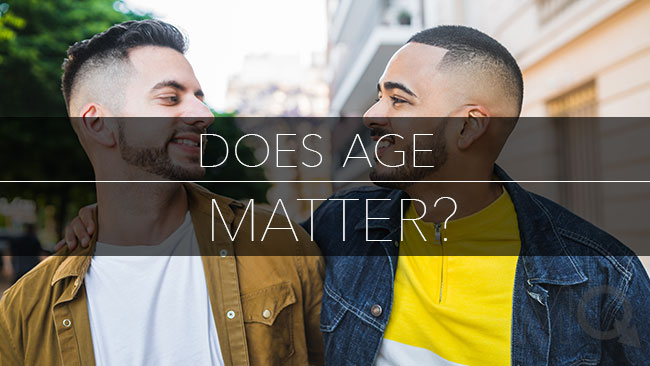 When you are browsing through dating apps, what’s the first thing you check other than people’s photos? Is it their height and weight? Is it the personal description that tells you more about them? Their location or favorite food?  For some people, maybe these things are the most important.  But I will willing to guess that the majority of people skip straight to the age section to see if their age matches yours.

Yes, it is entirely up to you to determine what kind of people you like, after all, attraction is a matter of preference. Some people like younger, and some prefer older, the same way that we have physical preferences.  Some prefer White guys, Asian, Black, Latino, you name it.

But many of the young, confused generation out there often run into the same problem – that is, people rejecting them due to their young age.

As a disclaimer, I am not promoting illegal activity, or suggesting that people should break the law.

I am well aware of the many restrictions that each country has, and the legal reasons that many guys get turned away.  Age laws are in place for a reason, and you should always protect yourself when dating online (more about that coming up soon).

This piece is instead a reflection of my own feelings and experience of being young and navigating the dating world.  Just like the many young readers who come to this site for advice and guidance – I can relate to the rejection and frustration you must be feeling.

If anything I want to use this opportunity to let people know that, just like me, you are not alone.  I also want to help other people who have encountered younger guys on dating apps understand the experience and perspective that the sub-18 generation feels when trying to find someone to love.

I personally realized my sexuality at the age 12, and I have been dating since the age 14,  around that same time that the smartphone apps were starting to take off.  We live in a time when people everywhere, from every demographic, use the Internet to connect with strangers and try to find “Mr. Right”. Yet, it was definitely not easy for me back when I was unfamiliar with the gay community.

Personally, people couldn’t really tell my age from my photos.  As it is, Asians look younger so it was easy for them to misjudge my real age from my appearance. However, I always tried to be honest with people up front, to tell them that I was really young in advanced.

But after a couple of rejections, I quickly started to lose faith. So, I decided to do some experiments.

I told people I was 18, and unsurprisingly enough I got more attention than ever. Suddenly, people that were interested in me actually wanted to date me. It also made me wonder.

Does the age really MATTER?

Many guys told me to go find someone the same age, but if it was so easy for me to do so, why did I sign up for the apps in the first place?  The reason for my rejection wasn’t because of my personality, or my appearance.  My rejection was because I was so young.

I can somewhat understand why I was turned down.  Knowingly having sex with someone under 18 in many countries is considered as pedophilia, and for older guys, hooking up with the knowledge of my young age could mean criminal charges or even going to prison.  But at the same time, my age, this number was the cause of my pains.

“Did it also take away my right to find happiness? To have someone to love me?”

I was desperate and angry for a while, I wanted to be the voice of the young generation, and I wanted to let everyone know that these numbers didn’t mean anything!   For me, I felt that you could be 14 and also be a very mature, smart and charming person.

But after I gained more experience, I began to see my ignorance. This is when I realized…

I realized that I needed to stop being so cynical. People are allowed to not like you, whether it is because of your age, your appearance, or your personality.

I realized that as long as people don’t hurt or disrespect you, they are allowed to have their personal feeling towards to you.

Sometimes it feels unfair – I get it, but you can not control this factor.

What you can do, is be patient and stay positive. Waiting is hard, no matter how old you are and with patience and time, one day, someone will like you and want to be with you.

I eventually dated an older guy, and was with him for a happy long time. He didn’t care about the age difference, and I am sure if someone really does like you, they will like not because you forced them to, but because they see you as an individual.

Be patient and be CAREFUL.

Wait for someone who loves you for who you are.  I know it sounds cliché but it’s a fact. He has to embrace every bit of you, not just your age, your face or your body – he needs to love all of you, the good and the bad.

So does the age matter? For some people the answer is yes – it is crucial to them. But there are also tons of people out there who think age does not matter, and just want to be with someone who they love, that’s all.  So, remember to be patient and wait for the right person.  You have your whole life ahead of you.