The Brexit Vote Matters to LGBTQ People Too 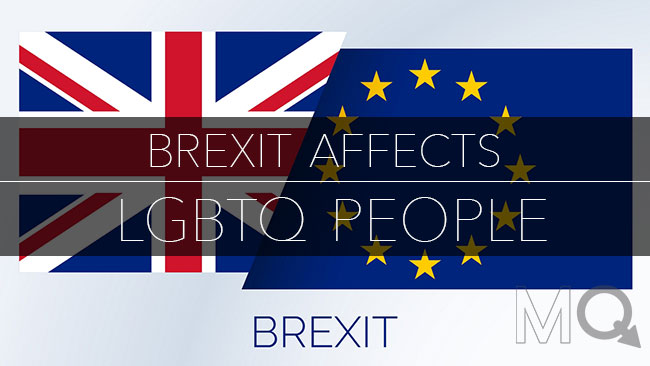 The moment Brexit became a reality, a round of applause roared through the office.  (But this soon died down after I quietly pointed out a misinterpretation of currency exchange mechanisms which, when adapted properly, deflated our cash-flow rather than inflate it as one of our officers had gladly thought.)  Apart from that one short-lived moment of excitement at work, I didn’t think about The Brexit much, as a person living half a world away from Europe and Britain.  That was until I came across this article: Why Brexit Vote Matters to LGBT People.

In the days immediately following that close to 50/50 vote, the news focused on the economic consequences the vote could have – of course, money always comes first.  But within days, the worried investment bankers and unhappy EU leaders sprawling over BBC were replaced by clips the world has enough of already:

What does hate towards migrant-looking people have anything to do with being gay?  For one, there are gay people among the immigrant and “migrant-looking” population in Britain.  History and current migrant situations tell us that within a marginalized population and community, gay people will be further marginalized.  Externally, this is because of the extra vulnerability a second minority identity adds to a gay person.  Internally, as part of a minority or marginalized group, the chance of being rejected by both the leading majority AND your own racial/ethnical community is a risk not many gay people will be willing to take.

Secondly, hate grows on top of hate.  The current hatred towards migrants and different ethnic or religious groups in Britain stems from a rejection of “non-me” identities.  Perhaps you would argue that there are also factors of social resources and job opportunities involved.  But if you take a look at how ethnic/religious minorities become victims of hate in an utterly indiscriminate way on a bus or in a taxi, it is without a doubt hate and discrimination based on this “non-me” identity.

Gay people are non-mes.  We are not the majority and we can easily be sucked into this whirlwind of anti-non-me people.  Hate does not stop if we do not stop it.

That is why Brexit affects the gay community, generating more hate when there is already too much.  And so we have an obligation to put a cap on it.

Don’t laugh when someone makes a joke about migrants.

Don’t roll your eyes when the non-me looking person stalls the line because of a language barrier.

Don’t imagine someone else will do something about this.

Do step out of your comfort zone to meet non-me people, do take the time to read more than one news channels and do say yes to diversity.