Is Taiwan the Most Gay Friendly Country in Asia? 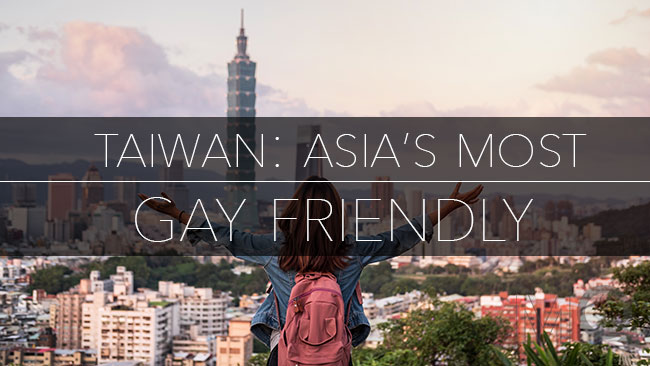 Before relocating to Taiwan, I had heard of how Taiwan is one of the most gay friendly places in Asia.  But I was yet to benefit from it as a gay local rather than a tourist until having moved here.  Having passed by a number of Asian countries before (Japan, Korea, Malaysia, Singapore, Thailand, Nepal), I have to say Taiwan is definitely at the high-end of “Good Gay Living”.  Although I haven’t lived in other Asian countries very permanently except for Thailand, simply looking at a few factors shows how you can be at ease when holding your partner’s hand in public in Taiwan (in the main cities like Taipei at least).

These are a few things I take into account when measuring gay freedom:

Presence and participation of Pride parades

Let me walk you through my first-hand experiences with this list.

Being Gay in Taiwan as a Queer Hong Konger

Taiwan has laws to protect employees on the basis of sexual orientation in the workplace.  (This is something Hong Kong is only talking about and won’t become a reality unless we systematically campaign very hard for it.)

Talking to local gay friends, most of them are still hushed about their identities at work especially in government bodies including the police force.  They are generally aware of the protection they are entitled to but are still worried about the stigma that may follow if they came out to colleagues.

On the other hand, there are the ones who have come out.  Just a while ago, one friend had gone straight to his colleague with a question about sexual orientation when we were engaged in a Line chat (popular social app in Asia) on this topic and had stated casually that his colleague knew he was gay.

Sadly, anti-discrimination laws do not go beyond the workplace.  But I am also impressed by Taiwan’s school curriculum where it is compulsory to discuss sexual orientation and gender identity with students.  This topic was included following the death of a boy who had been repeatedly bullied at school for “being different” with his feminine self-expression.  The death was unfortunate but has left a legacy to raise awareness and understanding for sexual orientation and gender identity.

Taiwan hosts the largest Pride parades in Asia with over 80,000 participants in the 2015 Taipei Pride alone.  (Again, comparing this to the 7 million inhabitants in Hong Kong that only generated a 4,000 people Pride in 2015, Taipei’s 2.75 million population has a significantly higher participation rate.  Even taking into account that people travel from all over Taiwan to Taipei for the annual event, Hong Kong’s Pride only attracts a handful of people from the 1.35 billion inhabitants from mainland China.)  This is an indicator of the awareness of within the queer community to be active in the gay movement and also how comfortable people are in showing their pride in board daylight and the glare of media spotlight.

As a side note, having gone to Pride Events in Hong Kong and Berlin, the one in Hualien City here in Taiwan drew tears to my eyes.  We were happily waving our rainbow flags on the main street of Hualien when a lady waved back from a car.  She was crying.  Someone went and gave her rainbow flyers, she accepted with tears still streaming.  Whenever I feel lazy about taking part in an action, be it a vigil or a protest, I think about that day at the Hualien Pride.

I was very very impressed with the scale and organization of local queer groups when I first arrived in Taiwan.  The largest of them all, Taiwan Tongzhi Hotline, is run by a group of very dedicated people who devote their time, day and nigh,t on a meager salary to empower the local queer community.  Hotline provides counseling services, group activities and seminars catering to the needs of all identities, ages and even people related to the queer community including family members and teachers.

The existence of well-run queer groups is essential in the gay movement for moving it forward and is again a good indicator of placing the queer community in the public sphere as part of the wider society.  (The only local queer group that has paid staff that I know of in Hong Kong has a staff of two.)  It also reflects the majority thought on the queer community, if would be difficult to establish a queer organization and attract paid staff to run it if the general public was strongly homophobic.

There is a nice circle of open air gay bars in Taipei which is a breath of fresh air compared to the handful of seedy gay bars in Hong Kong that seem to close before they even open.  Taipei hosts some of my favorite gay bars in Asia that pour better drinks for a more diverse crowd than any of the ones in Tokyo, Bangkok and Hong Kong.

There is more to the gay scene in Taiwan apart from having a nightlife with actual choices (we can actually ask which gay bar or district you want to hang out on Friday rather than if you want to hang out at the gay bar tonight, which is the case in Hong Kong and Bangkok).  I’m again impressed with the number of organizations and school groups that offer gatherings, seminars and volunteering opportunities for the gay community.  The Taiwan Alliance to Promote Civil Partnership Rights was established by a lawyer and hosts events on diverse topics and is a great way to learn about everything from Taiwan’s gay community to exploring gender identity.

I also love the bookshops and cafes that cater for us queers who have had enough of 2 am tequila shots.  I am a frequent at H*ours Cafe which is owned by a talkative and helpful gay local.  I often urge my friends to support gay-run or gay-friendly businesses if you’re not into activism because your spending there not only keeps the place open, it also shows the level of appetite for pink money.

Considering the items above, being gay in Taiwan is GREAT!  (You can actually be your gay self at a Buddhist center and talk about it with your mom there!)  If you’re looking for a place to relocate and want to continue being an activist while enjoying espressos or Mojitos in gay-friendly places, Taiwan is definitely my top recommendation.  Though there’s still a lot to work on, putting all aside, Taiwan is the only Asian place with an openly pro-gay (and female) president!

Is Taiwan the Most Gay Friendly Country in Asia?

–  Of course this question is a bit subjective and open to interpretation, but I want to leave you all off with a personal story that gives you a better idea of my experience living here so far.  It might be the last piece you need for me to better show you what I mean. –

“Where is your Athena*?”

A chill ran down my spine as I looked up to find a smiling lady beaming my way.  I wasn’t afraid or anything, but I am a very reserved person and the intimate way she referred to my partner’s name gave me the chills, especially when I had no idea who she was.

We don’t speak like that where I am from in Hong Kong unless referring to someone’s spouse.  Perhaps it was just the usual cute and cuddly way people spoke here in Taiwan, something I am still getting used to, having lived in blunt ole’ Hong Kong for most of my life.

Even so, there was a funny tone in her voice that I couldn’t quite decipher.  Anyhow, I soon brushed that off my mind and went on my way.

It didn’t cross my mind that the lady knew Athena was my partner because this happened in a Buddhist meditation center.  (I did NOT sign up for this, my partner did.  Not that I have anything against it but:

A) I am not a Buddhist

B) I can never sit for more than 15mins without feeling restless.)

The participants of the two-day meditation (i.e. mental torture) camp seemed quite religious and very “that-generation” (i.e. proper and, um, old school), we were among the youngest there.  So when I got a wink and smile from the lady that would have suggested something going on between two (or more) people in non-Buddhist/meditation settings, it didn’t occur to me that it was what a wink and smile would normally mean.

After leaving the camp (freedom, here I come!!!), my partner told me that a lady in her group had been talking about her gay son and how their family relationship had become rocky ever since he came out.  (The lady and her son had joined the meditation camp together to calm some strained nerves.)

It was then that I realized it was the same wink and smile lady and that your Athena had really meant my Athena.  I was pleasantly surprised for a moment but quickly remembered that I was in gay-friendly Taiwan where it was actually OK to say your son is gay in a Buddhist place.  Not bad, not bad at all.

*Names have been changed for identity protection.  I am as out as a VCR machine (which Japan has still been reportedly manufacturing and has announced that they will produce the last of these dinosaurs this month) but my partner is still coming to terms with her identity.  You’ll find me referring to her in different names (because I’ll probably forget what I named her before) but I feel like she sounds like an Athena today.

Prev post Is Same-sex Marriage Possible in Taiwan?
Next post Don't Worry About Me Mom: My Coming Out Story