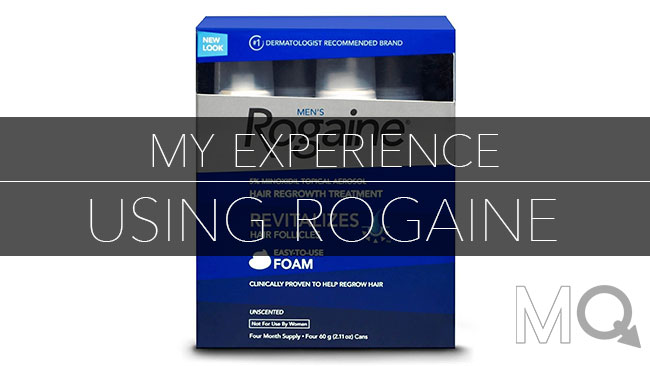 When I first realized I was losing hair I was in a panic.   At 20 years old my hair was starting to fall out.  Instead of letting my hair disappear I decided to do something about it.  I have been using Rogaine (Minoxidil) for 8 years and I am here to share my experience.  Like many people going in I was skeptical about how well Minoxidil actually works.  So does Rogaine work?

The short answer is yes! When used properly, Minoxidil can be one of the most effective ways to slow and even reverse hairloss.

To get the best results from using Rogaine or Minoxidil you will need to exercise Patientience, Consistency, and Commitment.

What is the cause of Male Hairloss?

Hairloss can come in many forms, be it from your environment, illness, or genetics. The most common common form of male pattern baldness is known as androgenetic alopecia (AA). The prevelence of AA is largely determined by genetics and causes hair folicles to shrink with time leading to thinning and eventual baldness.

How does Rogaine (Minoxidil) work?

Minoxidil works by preventing this folicle shrinkage to maintain and even regevinate thinning hair. Interestingly, the drug was discovered by accident, and although the exact mechanisms into how it prevents balding are still being understood, it is one of the earliest and most effective treatments for male pattern baldbess.

History of Minoxidil as a Hairloss Treatment

Minoxidil, the main ingredient in Rogaine was originally approved by the US Food and Drug Administration (FDA) as a treatment for high blood pressure in 1979. Shortly after, patients began reporting increased hairgorwth as a result of taking the medication, and was widely perscribed as a hairloss treatment in the 1980’s.

Minoxidil was officially approved by the FDA as the first hairloss treatment pharmacudical in 1988. Rogaine was then patented and sold exclusively by Johnson & Johnson until the Minoxidil patent expired in 2019.

Although the exact mechanism by which Minoxidil works is not fully understood, the treatment is a vasodilator, meaning it widens the blood vessels to deliver more oxygen-rich blood to the hair follicles. Minoxidil also helps increase the size of hair follicles, which promotes the growth of thicker, stronger hairs. In addition, the topical treatment shortens the resting (telogen) phase of hair growth, which means your hair stays in the growth (anagen) phase longer.

When starting a new medication, the effects are often not instant. You will need to apply Minoxidil regularly and allow it time to build up in your system for it to start to take effect.

Remember, Rogaine and its active ingredient, “Minoxidil” is not a miracle drug so results will not happen overnight. It took me about a month before I began to see even small improvements. Changes are slow and gradual and I personally didn’t have substantial hair re-growth until about 3 months in.

Rogaine is also a drug that needs to be used consistently and always in your blood stream in order to be effective.  This means applying it at least once a day, everyday.  Forgetting once in a while won’t spell disaster, but you really need to stay on top of using it and make it a habit.

Lastly, Rogaine is not a cure for baldness.  It is a treatment.  This means that once you stop using it, your hair loss will quickly return, and progress past where you started. If you want the results to be permanent you need to use it for life.

As far as side effects, mine were are pretty minor. I had fatigue and itchiness on my scalp for the first 2 months.  These are the most common but happen in different degrees for everyone.  For me though, a full head of hair is well worth the tradeoff.

My biggest gripe is how quickly you can lose your results.  It is easy to get overly comfortable once your hair returns. After a while I was convinced that the balding was all in my head – that I beat this thing.  Then, at around 6 months, I got lazy and started skipping out on using it.  As you might have guessed, the hair loss came back fast.

I got lazy and started skipping out on using it. The hair loss came back fast.

I can’t stress enough that you need to stay onto of using your Rogaine regularly.  It also took me a while to get over the paranoia of other people finding out I was using it.  But you really have to use it no matter what.

Minoxidil actually works.  It definitely takes some time to kick in, but in my opinion the trade-offs are well worth the confidence and self esteem I have gained back since I started.  Now, a year later my hair growth is almost completely back to normal.

Also, it is not much of a time commitment once you work it into your daily routine.  I typically apply it right after I get out of the shower and dry my hair off.  It takes about 10 seconds to do.  Now, I have made it something as mindless as brushing my teeth.

It’s well worth the confidence and self esteem I have gained back since I started.

Minoxidil has also gotten much cheaper in the last few years thanks to the drug being openly licensed to generic brands meaning you can get a year supply for less than $100.

What I Use To Re-Grow Hair

I caught my hairless relatively early on, and I have been fighting it with a regimen of different products. I can’t begin to mention how important it is to start earlier rather than later.  Minoxidil is effective at halting hairless, but doesn’t always regrow hair.

First, I have added a caffeinated shampoo. Hairless happens because your follicles gradually shut down over time. The caffeine is used to stimulate hair growth at the roots.   Caffeine has also been shown to block strong forms of testosterone linked to hair loss.

You can also get Minoxidil infused products but I have read a lot of reviews that say they aren’t as effective as using the foams or drops.

Next, I use Rogaine Foam after I get out of the shower and completely dry off my hair.  This is really  important because water can dilute and affect how your skin absorbs the solution.

I used to use the Rogaine Drops, but I really don’t really like the oily texture.  It often stained my pillows since I usually shower before bed.  It also takes much longer to dry and actually made my hair look thinner when it was wet.  I find the foam dries much faster and is a lot less of a hassle.

I am really sensitive about my hair, so I have always used Rogaine because of the brand-name. But, if you don’t mind using generics you can get Minoxidil for about half the price online. Kirkland Minoxidil drops on Amazon run for about $30 for a 6 month supply.  The Kirkland foam on the other hand is about $60 for 6 months.

Lastly, I take Biotin once a day.  It is cheap, about 7 dollars a bottle, and helps to speed up the process of hair re-growth.  I started taking this about half way in, and I saw a noticable boost in my hair regrowth.

I am still using these products everyday. and will have to for the rest of my life, until a real cure comes around.  But in reality, It is well worth it if it means keeping my full head of hair.  I really can’t emphasize that you need to attack your hair loss as soon as possible and be consistent if you want to see the best results.

If you have any tips of suggestions leave them in the comments below.

Prev post The HIV Home Test: New Kit Let's You Check Your Status at Home
Next post How to Stop Hair Loss and Reverse Balding

One thought on “Does Rogaine Work? Hair Loss After Using Minoxidil”