Catfished and Tricked into Sex at 12 Years Old 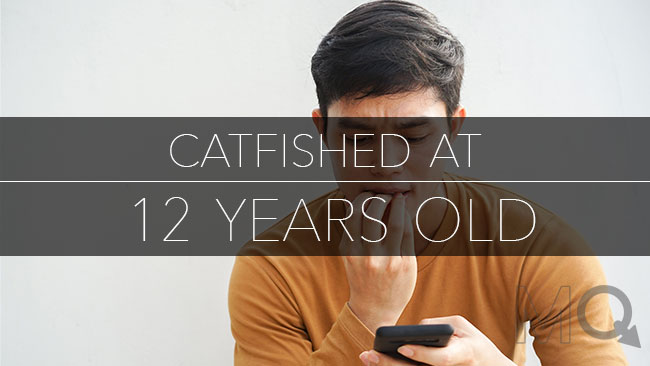 Back when I was 12, I met a guy in an online chatroom.  The photo he sent me was dreamy, and looked like it was taken by a professional – looking up towards the sky, his eyes sparkling in the sunlight.  He looked like K-Pop star with a slim figure and a gentle smile.

It was too good to be true, but at the time I was inexperienced and childish.  How could I have known any better?

My imagination ran wild with thoughts of me and him together.  I knew that the moment we met was going to be epic!  Everything between us was going so well – almost too well….

That is until we decided to meet in person.

As I exited the MRT station onto a crowded street I couldn’t see him anywhere.  When I was on the phone with him I started to feel that something was off.

His voice didn’t match the face in his pictures, and as the crowd on the street started to fade away, I could finally see someone at the end of the street, a phone pressed against his ear holding a briefcase in the other hand.

He was looking around like he was searching for someone.

This was my very first thought. I wasn’t sure whether it was because of the distance or because I had forgotten to put on contacts that day, but he was nothing like the pictures I had seen before. He glanced over towards me and started to wave.

He had seen me…

Now what?  I had no choice but to walk towards him as slowly as possible. Part of me was frightened, but for some reason my legs just kept on moving.

I was telling myself that he couldn’t be that bad, and there he was, staring down at me like I was some kind of prize that he just won at the carnival.

And here I was, 5”7’, about 170 cm tall, yet for some reason he was even shorter than I was. Not to mention he was clearly much chubbier, and wearing a suit that was not flattering at all.  The only thing that matched his photo, was his black hair. In other words…

The photo he had sent me was a fake.

I wasn’t mad about the fact he wasn’t my type, but because of the fact that he had LIED to me.

After an awkward silence he pointed towards his apartment, and we started walking together.  He tried a few time so strike up a conversation, but I didn’t want to talk much.

I was too scared to say a word.

When he tried to take off my clothes…

When he tried to enter my body…

I couldn’t take it anymore, but I felt powerless, unable to make him stop.  I felt filthy.  Dirty.  Like every inch of my skin was tainted, but I was afraid to leave, so I stayed there all night.

I went home in the morning and locked myself inside of the bathroom for 2 hours, trying again and again to scrub every bit of my body.

As the bubbles fell down to the floor and sank into the drain, I tried to put the memories of what had just happened behind me and lock them away.

I kept thinking to myself that I should have just said no, and run away, but I froze.

I was unable to move…

I knew what the world was like after that day, and was scared to meet people for a long time after.

That experience when I was 12 traumatized me for my entire life.  I was young, and vulnerable and had no way to know any better.  It was ultimately because of the support and help from my friends that I was able to move past what had happened to me.

After that day I made a promise to myself  to ALWAYS protect myself.

This is an experience that I never wanted to encounter ever again.

If you ever run into a similar situation, if you are ever lied to or tricked – JUST LEAVE.

By staying you are putting yourself in MORE danger and you don’t want to spend another moment with that person.

Also, remember to always make an effort to tell someone where you are going beforehand.  This can be a family member or a close friend.  It is also a good idea to let someone know who you are meeting, especially if you are young.  This can give you an outside perspective and make others aware of his identity and location.

Lastly, if you are meeting someone for the first time, make sure to pick somewhere you are familiar with and somewhere with lot of people.  This can be a metro station, convenience store, or restaurant. That way, if anything goes south, you can always ask for help from other people around you.

The internet has made the dating world much easier for us gays, yet the convenience of these apps allows people to become whoever they want.  All you need is some random guy’s pictures and a cell phone then BANG!

You are an entirely different person!

To all the people who have ever lied about their identity,  honesty is the most important quality that people always look for. Your appearance might not be the reason why people turn you down, but the fact you lie about who you are. And it’s equally crucial that you embrace yourself, because no matter how hard you try to disguise something, the truth will come up to the surface eventually.

And for all of us who want a hot date or a nice hook up with the increasing variety of ways of meeting new people, we have to remember to be careful.   Don’t ever let someone take advantage of you, and remember to protect yourself.

Even if you are young, vulnerable, and looking for love, remember to be strong.  The people and experiences you have early on will define you, and stay with you for the rest of your life.  So stay smart, be safe, and always protect yourself.